Serengeti national park has a million wildebeest each one driven by the same ancient rhythm, fulfilling its instinctive role in the inescapable cycle of life: a frenzied three-week bout of territorial conquests and mating; survival of the fittest as 40km (25 miles) long columns plunge through crocodile-infested waters on the annual exodus north; replenishing the species in a brief population explosion that produces more than 8,000 calves daily before the 1,000 km (600 miles) pilgrimage begins again.

The Serengeti ecosystem is a geographical region in Africa. It is located in northern Tanzania. It spans approximately 30,000 km2 (12,000 sq m).

The Serengeti hosts the second largest terrestrial mammal migration in the world, which helps secure it as one of the Seven Natural Wonders of Africa, and as one of the ten natural travel wonders of the world. The Serengeti is also renowned for its large lion population and is one of the best places to observe pride in its natural environment. The region contains the Serengeti National Park in Tanzania and several game reserves.

Approximately 70 large mammals and 500 bird species are found there. This high diversity is a function of diverse habitats, including riverine forests, swamps, kopjes, grasslands, and woodlands. Blue wildebeests, gazelles, zebras, and buffalos are some of the commonly found large mammals in the region. 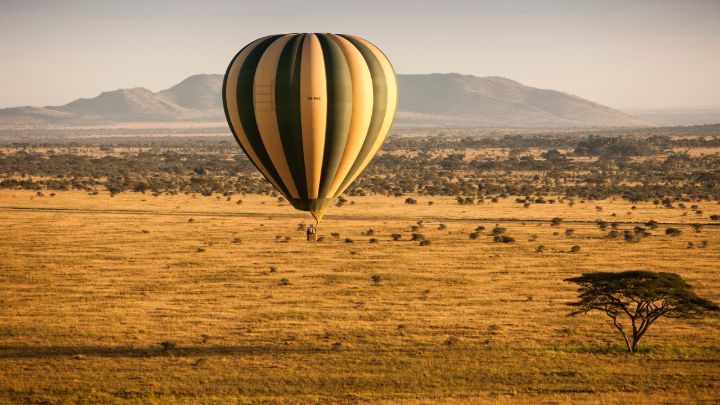 The annual migration of giant herds of grazers across northern Tanzania and Kenya is a truly spectacular event. Over two million wildebeest, zebras, and gazelles move through the Serengeti and Masai Mara ecosystems in search of green pasture, in a regular pattern. This is surely one of the greatest wonders of the natural world.

However, as with anything in nature, the actual day-to-day pattern is remarkably unpredictable – the wildebeest haven’t checked the maps, unfortunately, and have their own ideas!

If you would like to safari at the heart of the Great Wildebeest Migration, the best approach is to book one of our mobile camping Safari packages This will be in particular set apart from the other normal safari packages for our commitment to keeping up with the herds Under Canvas. These are mobile operations that will be located near or amongst the herds, experience superb mobile operations from July to November, and from December through to March. For the rest of the year, the fabulous camps we use are Closed.

If going mobile is a little too adventurous for you, although the Serengeti has various permanent lodges that will offer all the creature comforts you need together with a good location to see the herds on your Tanzania safari. Here is an overview of the movement of the herds, and the best permanent lodges to stay at for each time of year. 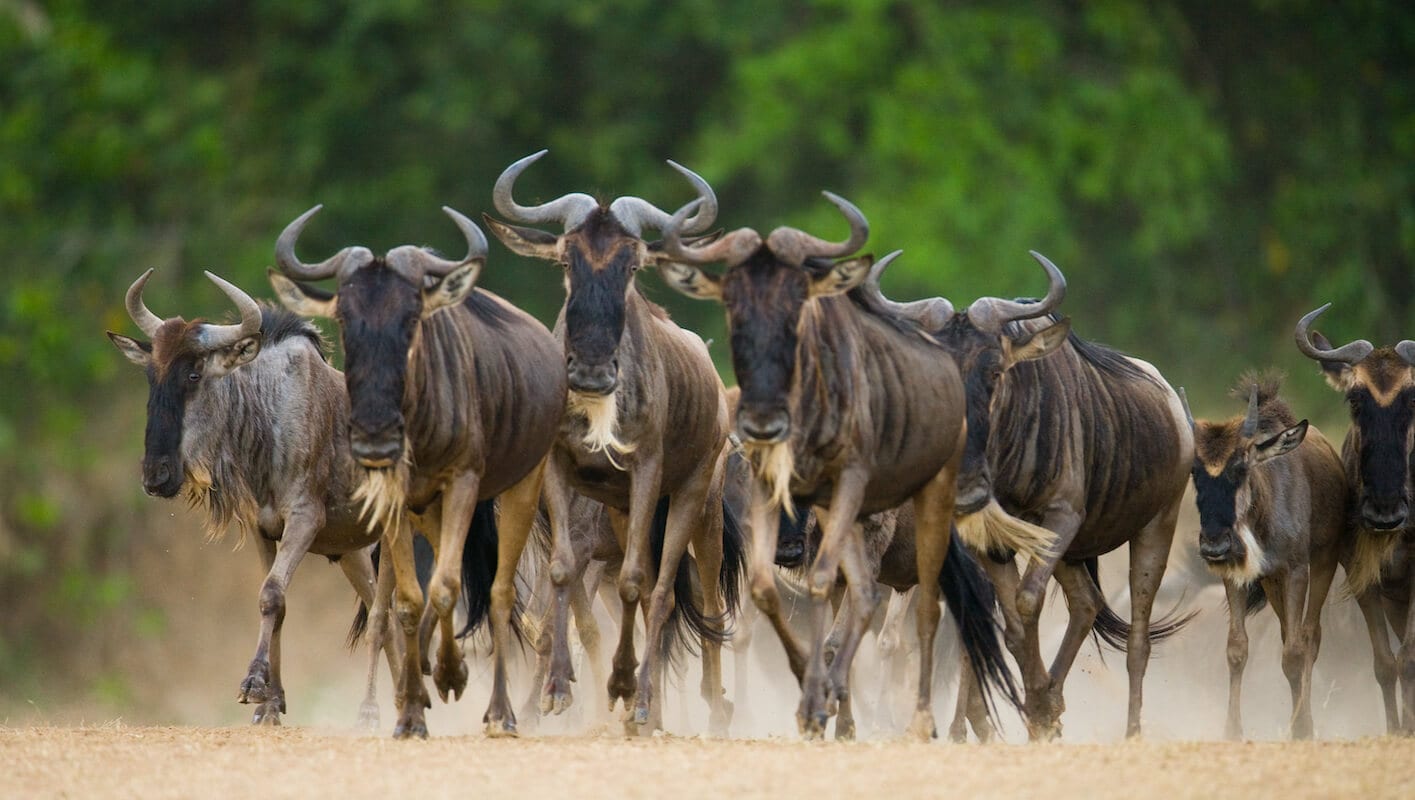 The Southern Serengeti’s huge grass plains extend into the Ngorongoro Conservation Area. From December to March the Serengeti Migration congregates around Lake Ndutu in the Ngorongoro Conservation Area. When it reaches the area, the herd splits up and spreads out leaving wildebeest herds as far as the eye can see. Ndutu Lodge and Kusini are the only permanent lodges in the area; Kusini is best towards the end of the period whereas Ndutu Lodge works throughout. Asilia’s Dunia Camp is also a good option at the beginning of December and again when the herds push north in March. 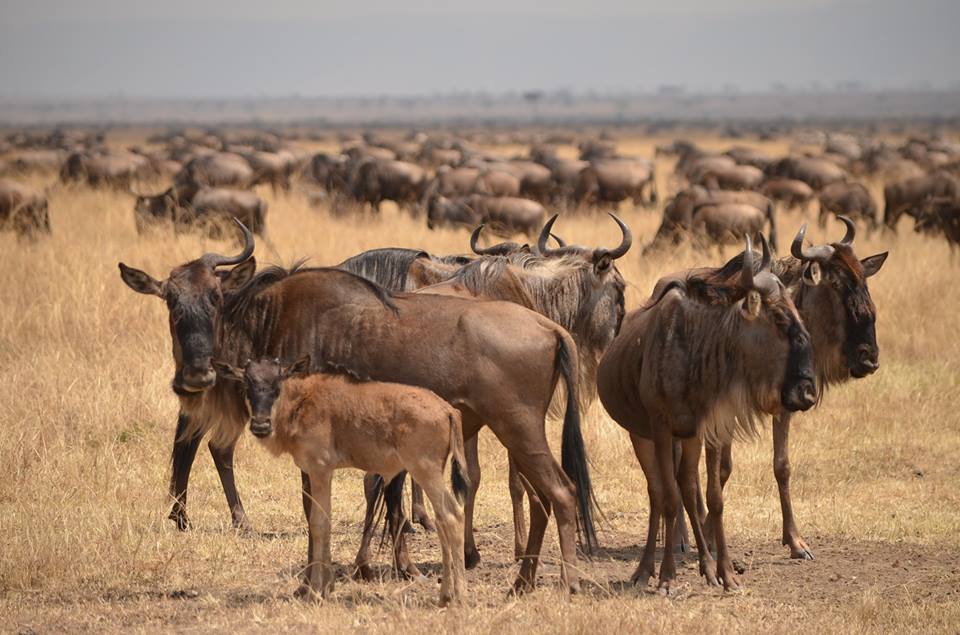 The Wildebeest migration moves north into the plains of the southern Serengeti National park with front runners stretching out to the Western Corridor and center of the park at Seronera. Asilia’s Dunia Camp is a great option at this time as are any of the central Serengeti hotels such as the Serena or Sopa. Early herds may well have pushed up to the Western Corridor.

By June there are wildebeest herds spread from the Western corridor through the heart of the park. One group tends to head West into the Western Corridor and crosses the Grumeti River before leaving the park and entering the exclusive Singita Grumeti Reserves. This herd will then head up through the Ikorongo game reserve on the Serengeti’s Western corridor before the front runners arrive in the Kogatende area in July. The other herds head directly to the north of the Serengeti National Park, passing straight up the middle through Seronera, Lobo, and up to the Bologonja river area near the Eastern border with the Loliondo reserve at Klein’s. It is true to say that at this time herds can be anywhere from the Western corridor through to the Eastern side of the park. Splinter herds will break from the main herds, covering huge areas in their search for fresh grasses. We would recommend Grumeti River Camp, Faru Faru, Sasakwa, Sabora, Mbalageti Lodge, and Kirawira for the Western corridor, whereas some herds will have pushed up as far as Migration camp in the Northern Lobo area. Late July will see any of the Kogatende permanent lodges having good herds, Serengeti Lamai and Sayari Camp being the places to go towards the end of July.

August through to October

From August through to October the herds are in the Northern Serengeti at Kogatende as well as in Kenya’s Masai Mara. River crossings often happen daily here. With only a fraction of the visitor numbers that flock to the Mara, Kogatende is an exceptional destination. Given that the herds are simply following local rainfall, some move north, some move south… and many moves in both directions in the same day. The sprawling mass moves in a circular fashion throughout these months – and as a result, this is a fantastic time of year to see the herds. 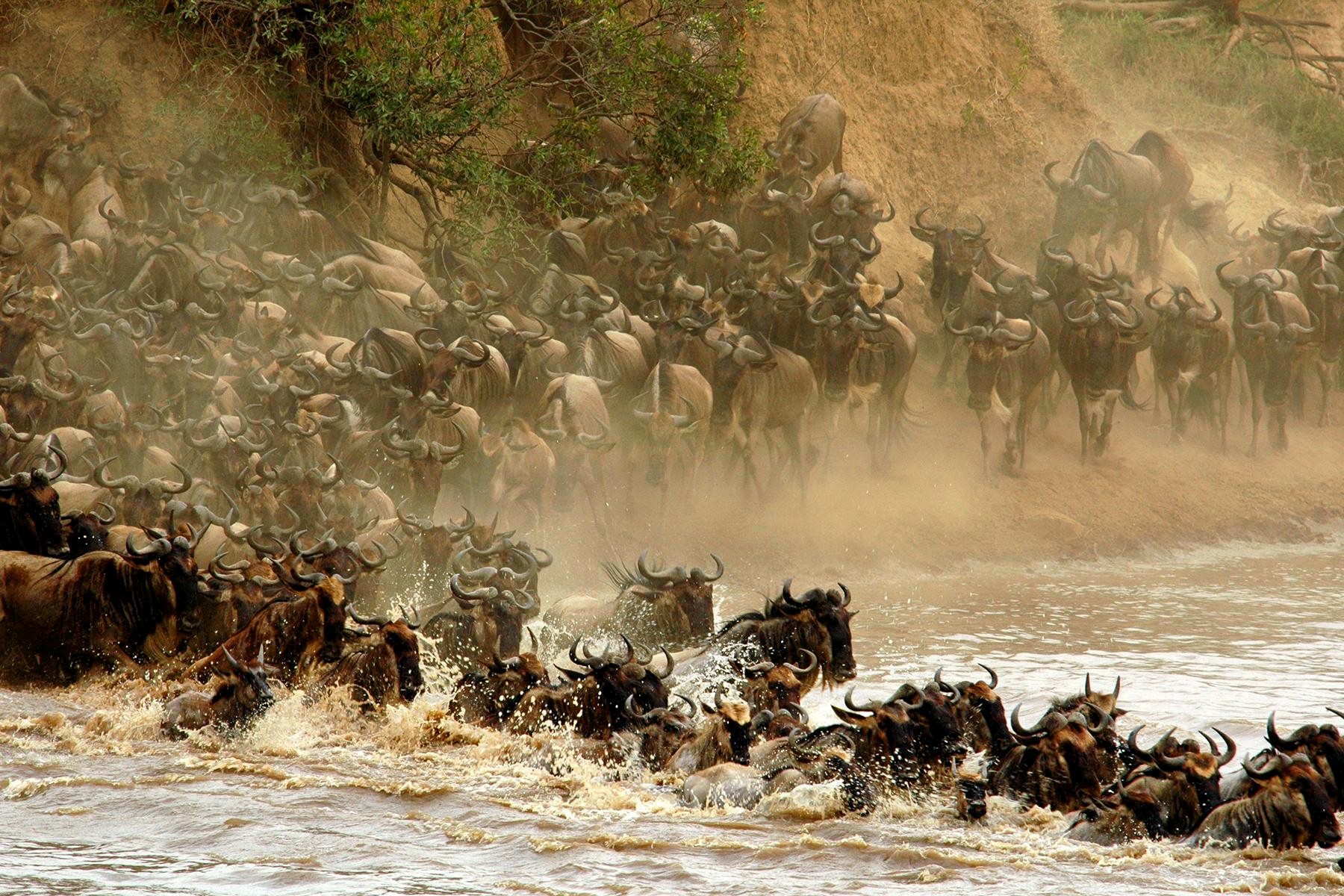 In late October and November, the herds start their second Great Migration south towards the fertile lands of the Ndutu plains where the rains will have rejuvenated the grasses since the herds were last there earlier in the year. This can be a tricky time to catch the mega herd, as it covers vast distances every day.

By the beginning of December, the herds are returning to Ndutu to calve, and the whole process is ready to start all over again. Show me less.

However, we must reiterate…. wildebeests are not the most predictable of animals! The Migration is also entirely dependent upon rain, with the herds constantly searching for fresh grasses. As a result, it is a challenge to predict with any confidence where the herds will be during any particular week, and therefore to decide where best to stay.

Our migration map is a great indicator of what the herds are ‘supposed’ to do throughout the year; choosing a permanent camp for your Tanzania safari that is located in the ‘right’ area for the time of year will clearly increase your chances, but there are no guarantees.

Once again, the very best way to catch the herds is to book our famous mobile camping, trip, which moves with the Herds.