Lake Manyara National Park is a protected area in Tanzania’s Arusha and Manyara Regions, situated between Lake Manyara Stretching for 50km along the base of the rusty gold 600-meter high Rift Valley escarpment, Lake Manyara is a scenic gem, with a setting extolled by Ernest Hemingway as “the loveliest I had seen in Africa” and the Great Rift Valley. It is administered by the Tanzania National Parks Authority and covers an area of 325 km2 (125 sq m) including about 230 km2 (89 sq m) lake surface. More than 350 bird species have been observed on the lake. 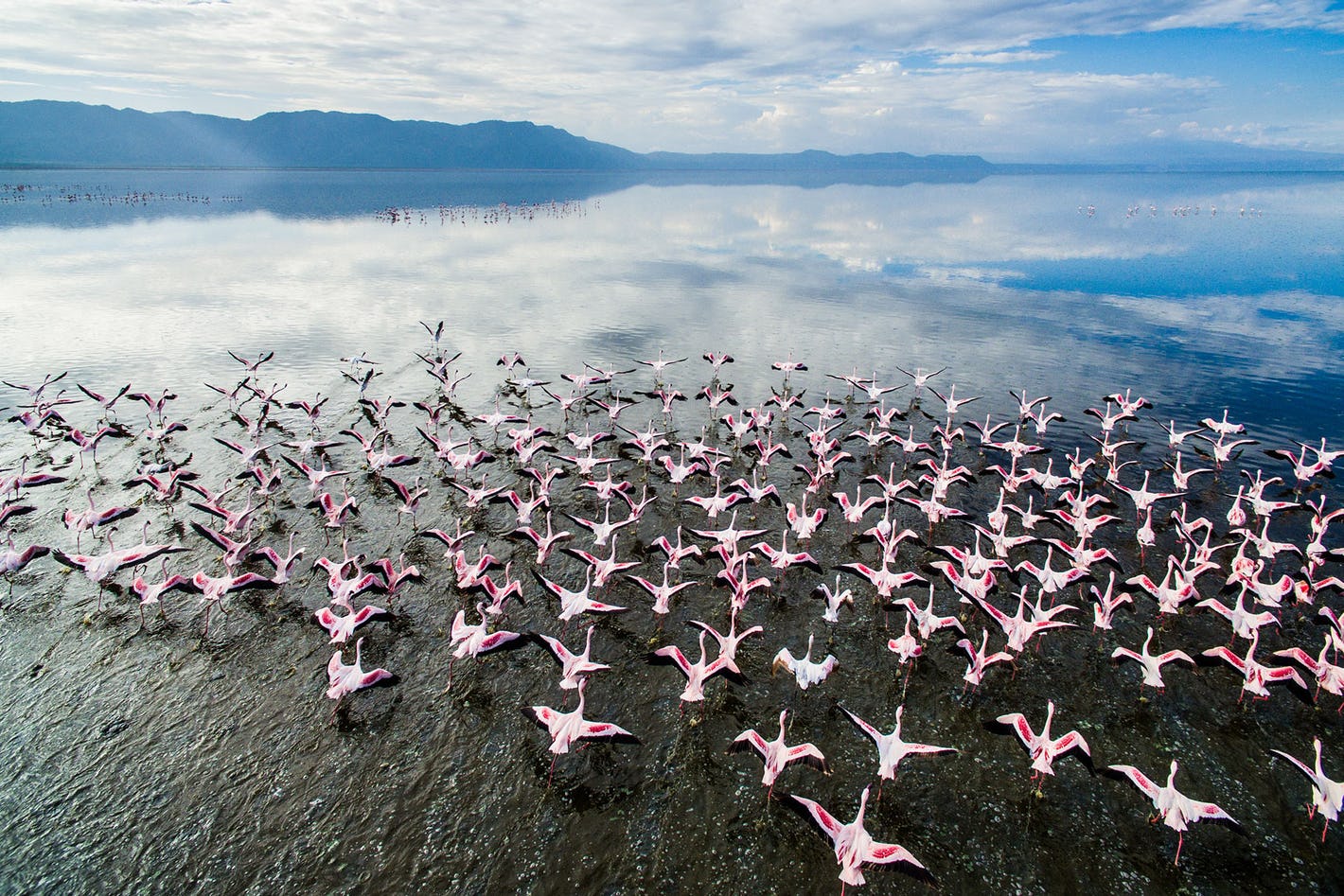 Is a protected area in Tanzania’s Arusha and Manyara Regions, situated between Lake Manyara and the Great Rift Valley. It is administered by the Tanzania National Parks Authority and covers an area of 325 km2 (125 sq mi) including about 230 km2 (89 sq mi) lake surface. More than 350 bird species have been observed on the lake.

Since the 1920s, the Lake Manyara area was used for sports hunting. In 1957, a game reserve was established. In 1960, it was given National Park status and in 1974 about 550 ha (1,400 acres) were added to the southern end. The majority of the land area of the park is a narrow strip running between the Gregory Rift wall to the west and Lake Manyara, an alkaline lake, to the east. The national park only includes the northwest quadrant of the lake, about 200 km2 (77 sq mi). It is part of the much larger Lake Manyara Biosphere Reserve, established in 1981 by UNESCO as part of its Man and the Biosphere Programme.

Lake Manyara can be accessed through Lake Manyara National Park. With an entrance gate that doubles as an exit, the trail into the park is effectively a loop that can be traversed by a jeep within a few hours. The trails go through forests shrublands and marsh, before reaching the shore of the lake. The Rift Valley escarpment provides a spectacular backdrop. From the nearby town of Mto wa Mbu, through the Cultural Tourism Programme, it is possible to organize a canoe trip on the lake, or a fishing trip to learn traditional fishing methods. Bicycle trips to the east shore of the lake can also be arraigned. 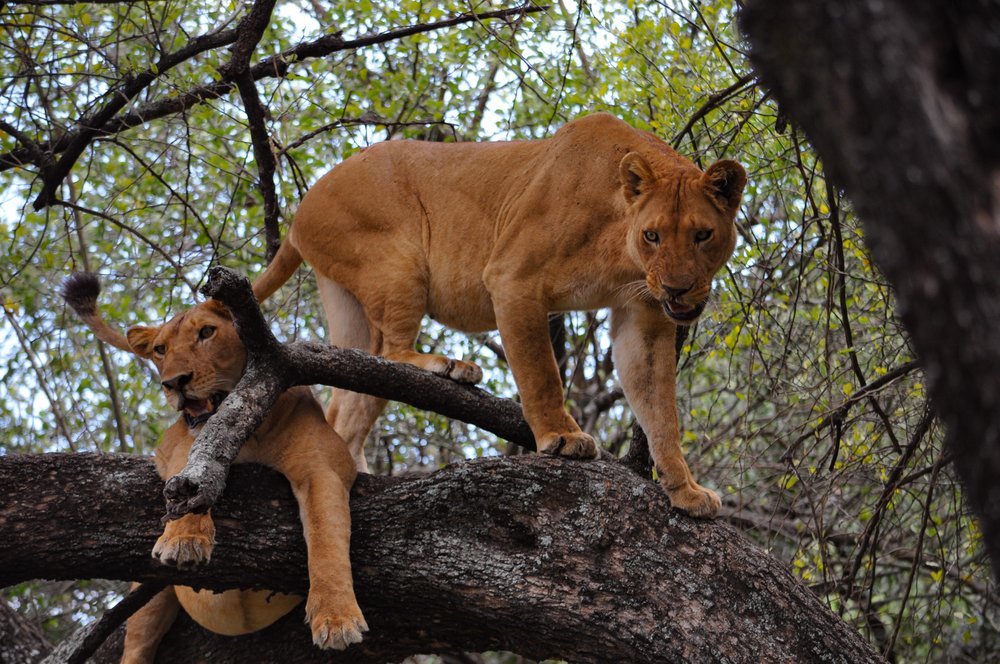 There are two rainy seasons – “short rains” from November to December and the “long rains” from March to May. The wettest month (with the highest rainfall) is April (161 mm (6.3 in) and it also has the highest number of rainy days (19 days). The driest months (with the lowest rainfall) are July, August, and September (1 mm (0.039 in). September also has the lowest average number of rainy days (2 days). The warmest months (with the highest average high temperature) are January, February, and March 30 °C (86 °F). Months with the lowest average high temperature are June and July 25 °C (77 °F). The adjacent highlands tend to be cooler with more rainfall. 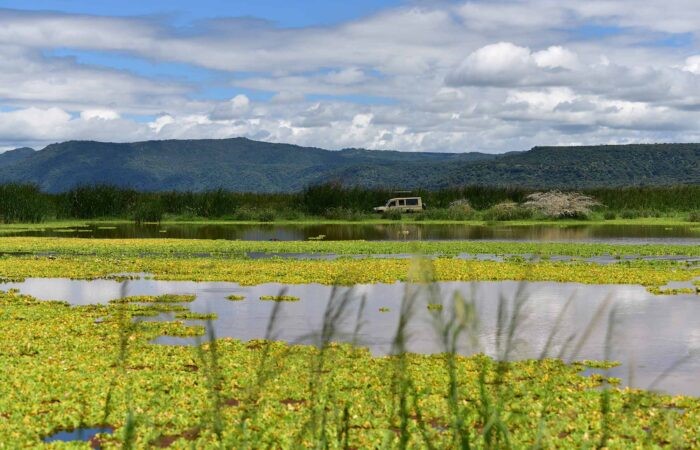 Lake Manyara National Park has located 126 km (78 mi) southwest of Arusha and can be reached by car in an hour and a half. The park can also be reached from Babati the capital of the Manyara Region. Lake Manyara Airport is nearby. To the south of the park is the 35,399 ha Marang Forest Reserve, situated on the escarpment above the park. To the east are the Kwa Kuchinja Wildlife Migration corridor, which allows wildlife to migrate between the nearby Tarangire National Park to the southeast, Lake Manyara to the west, and the Engaruka Basin to the north. Within the Kwa, Kuchinja corridor are several villages. Further from the lake and outside of village land is the 45,000-acre Manyara Ranch, a former livestock ranch, managed by the Tanzania Land Conservation Trust since 2001 and an important part of the corridor allowing wildlife movement between Tarangire and Lake Manyara national park.