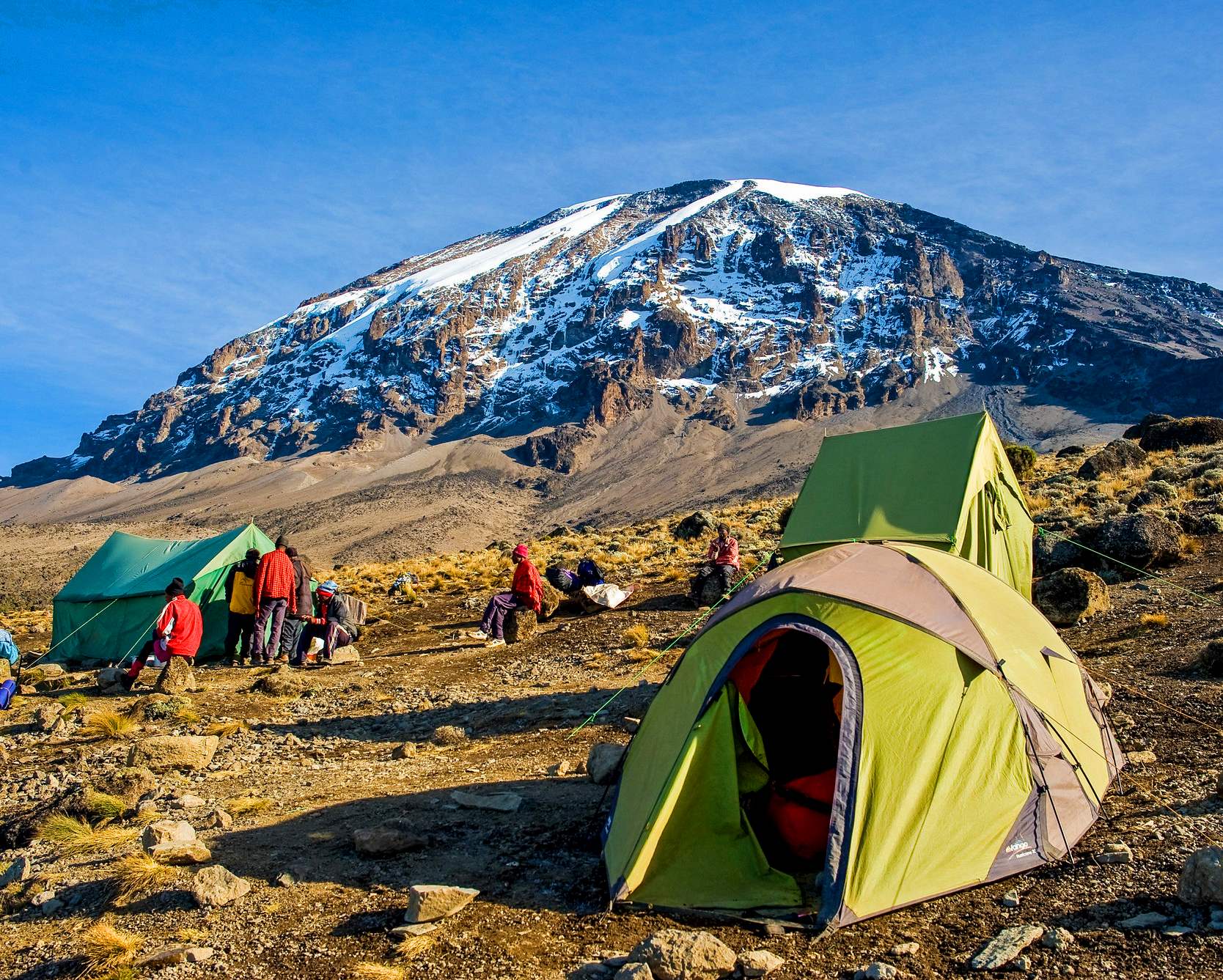 When is the best time of year to climb Kilimanjaro

The best time to climb Kilimanjaro are the months of January through early-March and June through October. The clear skies, great views, and the sunshine makes it the best comfortable hiking conditions. However, there is always the possibility of weather changing dramatically, regardless of the season.

You can climb Kilimanjaro at any time of the year, but certain months are better than others. We recommend best to climb Mount Kilimanjaro during the driest months We avoid April and November as these are the main rainy seasons, making the trails more dangerous.

What is the best month to climb Kilimanjaro?  month by month overview

Unlike the Himalayas, Kilimanjaro is never “closed”. You can trek year-round, but you need to be prepared. We do not normally offer climbs during April/May and November.

When can you climb Kilimanjaro – Important Considerations

Kilimanjaro is close to the equator and doesn’t experience the same four seasons as the more temperate parts of the world. Instead, it has rainy seasons and dry seasons, both of which alter the complexion of the mountain.

The best time to climb Kilimanjaro are the months of January through early-March and June through October. The clear skies, great views, and sunshine make for spectacular photo-opportunities and comfortable hiking conditions.

These are also usually the drier months of the year and the busiest. Read more: Guide to Kilimanjaro Weather.

Temperatures on the mountain vary with the seasons and also within the different climate zones as you climb higher.

The summit zone is considered “Arctic” and temperatures drop well below freezing at all times of the year.

December to March, and June (just after the rains) are usually the coldest, and there’s a good chance you’ll see snow on the summit. This reduces the number of visitors (as compared to July through August which is the busiest time).

There are two distinct wet seasons in the Kilimanjaro area:

April and November usually have the highest rainfall, although this can vary.

The rainy season begins around mid-March and typically extends well into May. During this time, conditions can be wet, stormy and muddy on Kilimanjaro, particularly along its southern face.

Even in the dry season, it’s always possible to get some rain. That’s why we always carry good wet-weather gear in our daypacks.

You didn’t come all this way to trek through cloudy skies and fog. During late March to the end of May, and all of November, the visibility can be poor due to cloud cover. You won’t be seeing the panoramic vistas, and you won’t be getting great photos.

Crowds: Number of climbers on Kilimanjaro

As climbing Kilimanjaro becomes more popular, the favorable weather in January through early March, and June through October makes the mountain busier.

It’s usually the Marangu and Machame routes that suffer from some overcrowding. If you opt for one of the less busy routes, such as the Northern Circuits, Rongai or Lemosho, you’ll still get to enjoy the vistas without too many people.

One of the main downsides that climbers try to avoid when trekking during busy times is the overcrowding of the toilet facilities at campsites. We take care of our climbers by providing you with private toilet tents, used only by our group.

The sense of camaraderie and friendships forged by meeting other climbers more than makes up for it being a bit “busy”. Many of our clients have made lifelong friendships with people they’ve met on the mountain.

What’s the best time to climb Kilimanjaro without the crowds?

If you don’t mind the possibility of getting rained on and are well prepared, the shoulder-seasons just before and after the rains are the quietest time of year.

If you’re looking for solitude, it can be a worthwhile trade-off to risk a bit of wet weather to have the mountain to yourself.

We avoid climbing in the height of the rainy season (April/May and November).

Alternatively, choose one of the routes that has less foot traffic. In the wetter months, we recommend the routes on the northern side of the mountain, which tend to experience less rainfall, and are more sheltered. 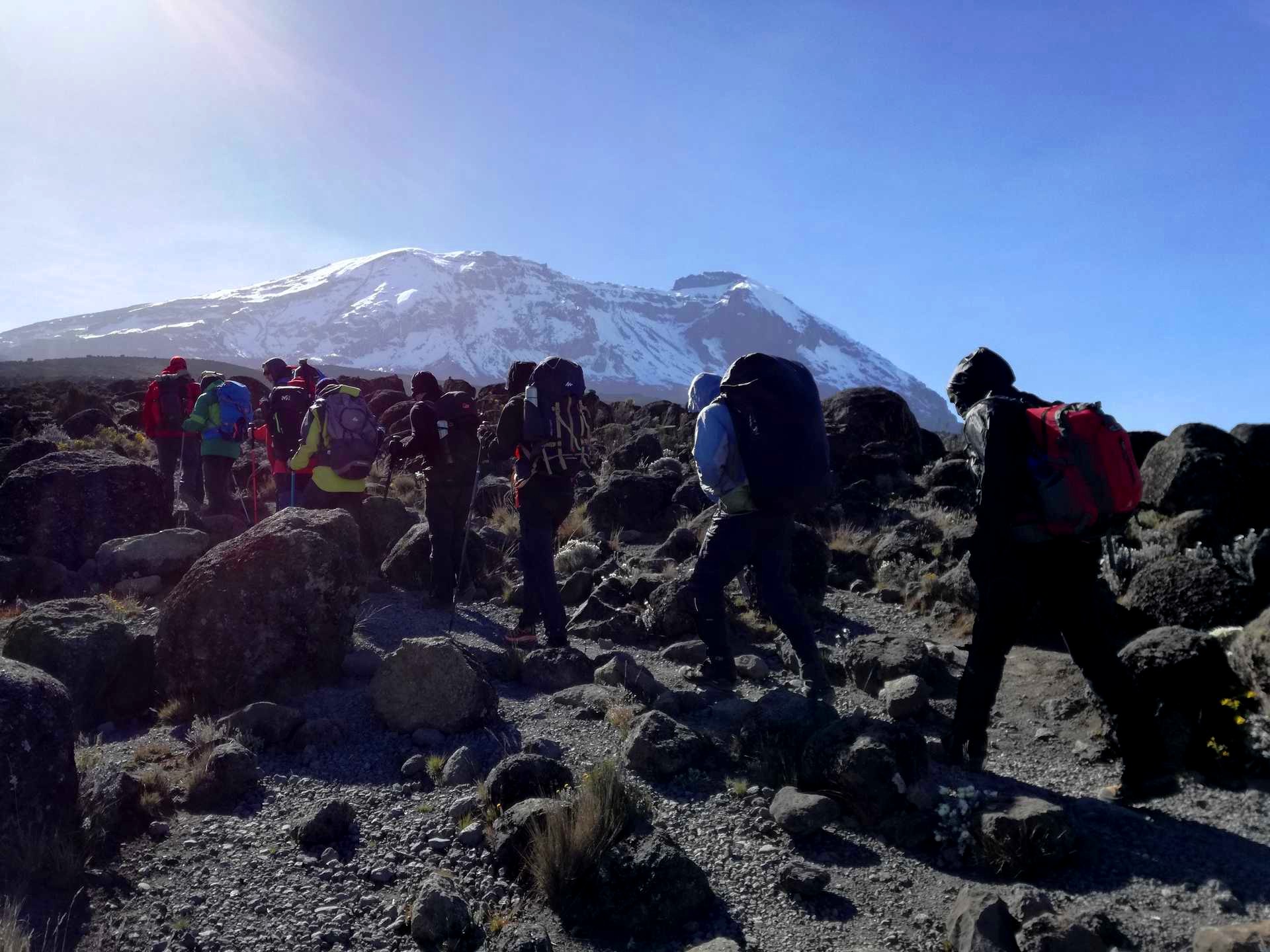 If you’re an experienced hiker, you might not be concerned with slippery trails and a bit of mud.

For inexperienced hikers, we recommend climbing during the drier months. Less chance of rain means less stress and discomfort, giving you more time to enjoy your surroundings.

On the lower slopes, through the forest, the trail can become quite muddy, and higher up slippery, rocky trails can be a challenge.

We take your safety very seriously. Climbing Kilimanjaro guides are highly experienced and have hiked Kilimanjaro in all weathers. We monitor the weather and are flexible enough to be able to alter the daily itinerary during inclement conditions.

Getting wet increases your chance of getting extremely cold. As you ascend, your body is already having to deal with the effects of altitude, and wet clothes can be the difference between a slight chill and hypothermia.

It’s extremely important for your safety and comfort to keep your gear dry, avoid getting soaking wet, and never stay in wet clothes!

You’ll need some very robust wet-weather gear (which we recommend at all times of the year), choose one of the less challenging itineraries, and make sure your gear, both in your daypack and duffel bag, are in waterproof bags.

Note: the Tanzanian government has banned the use of all plastic bags, so please don’t use garbage bags or ziploc bags to store any of your gear. We recommend waterproof stuff sacks, such as these.

Depending on what you want to do before and after your climb – a Tanzanian safari or a Zanzibar holiday perhaps – or simply when you can get time off work to travel, can inform your decision about when to climb.

Ultimately, apart from the really wet months, (April and November) there’s no “bad” time to climb Kilimanjaro. Nor is there a “perfect” time to climb. Weather conditions on any mountain can be unpredictable – that’s all part of the adventure.

Picture this: a cloudless midnight sky, illuminated by a full moon. You dress in your summit gear, come out of your tent and see the majesty of the mountain you are about to climb, lit by the moon. You hardly need your head torch as you ascend.

There’s something magical about climbing Kilimanjaro in the light of a full moon. Treks around the full moon can get quite busy, so bear this in mind if crowds are a problem for you.

If you find the full moon makes you feel like a wolf and start howling or find it difficult to sleep with the light, schedule your dates around the New Moon. With less light, you get fantastic star-gazing, with the constellations clearly visible. 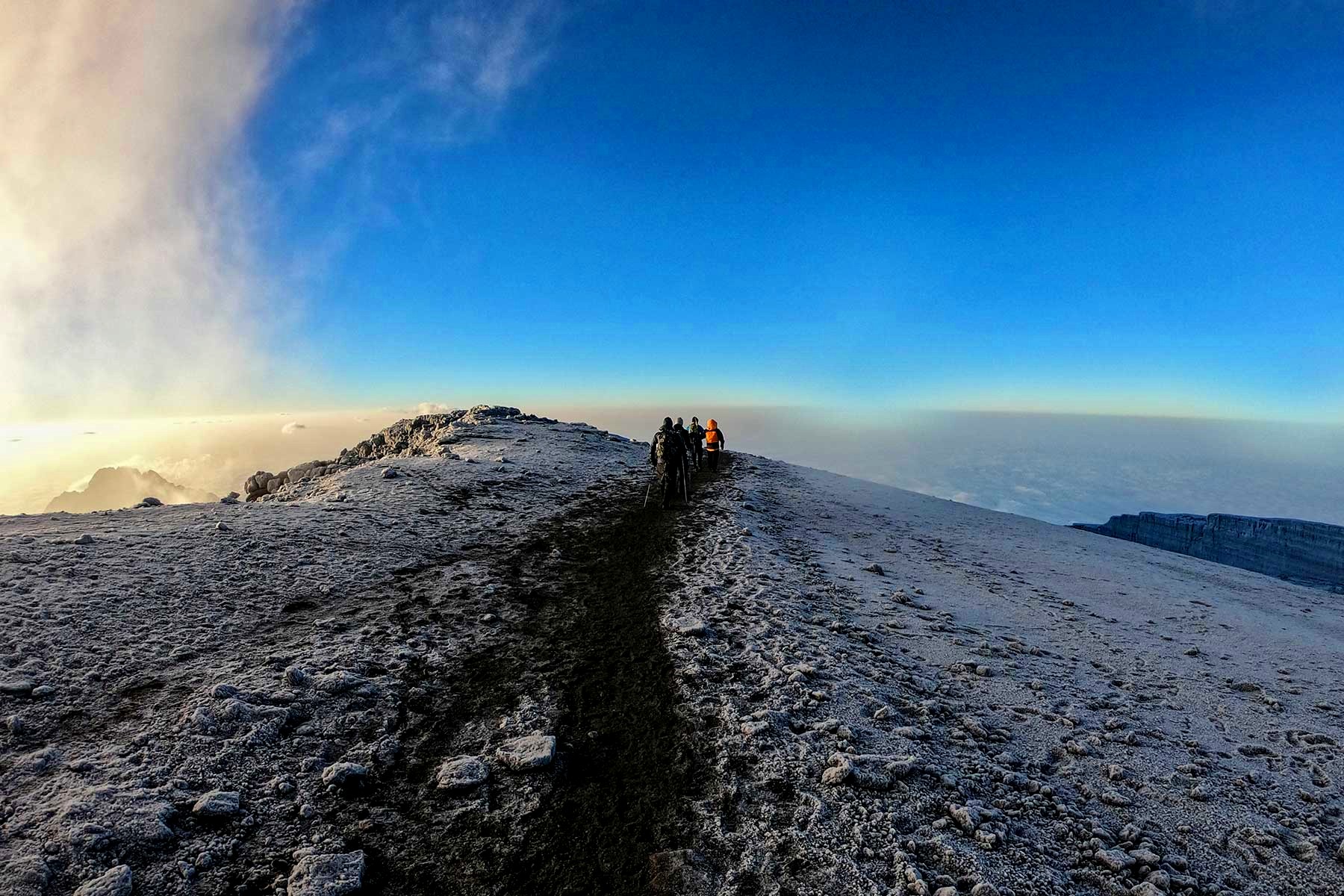 A Note on the Kilimanjaro Climate Zones

You’ll be trekking through five main Kilimanjaro climate zones, each with unique weather patterns. Some have compared it to walking from the Equator to the North Pole.

Summing Up The best time to Climb Kilimanjaro

Kilimanjaro can be climbed year-round, but for your safety and comfort, Climbing Kilimanjaro avoids the long and short rains (April-May and November) and recommend the drier months. We can accommodate you if your schedule only allows you to trek in the shoulder-seasons.

Read our in-depth guide to Kilimanjaro weather or follow the Kilimanjaro Weather Forecast.

Got questions? We’re here to help! Leave us a comment, send us an email info@travelcationafricasafaris.com or hit the live chat button.

Ready to book? Contact Us or have a look at our Kilimanjaro routes and pricing.